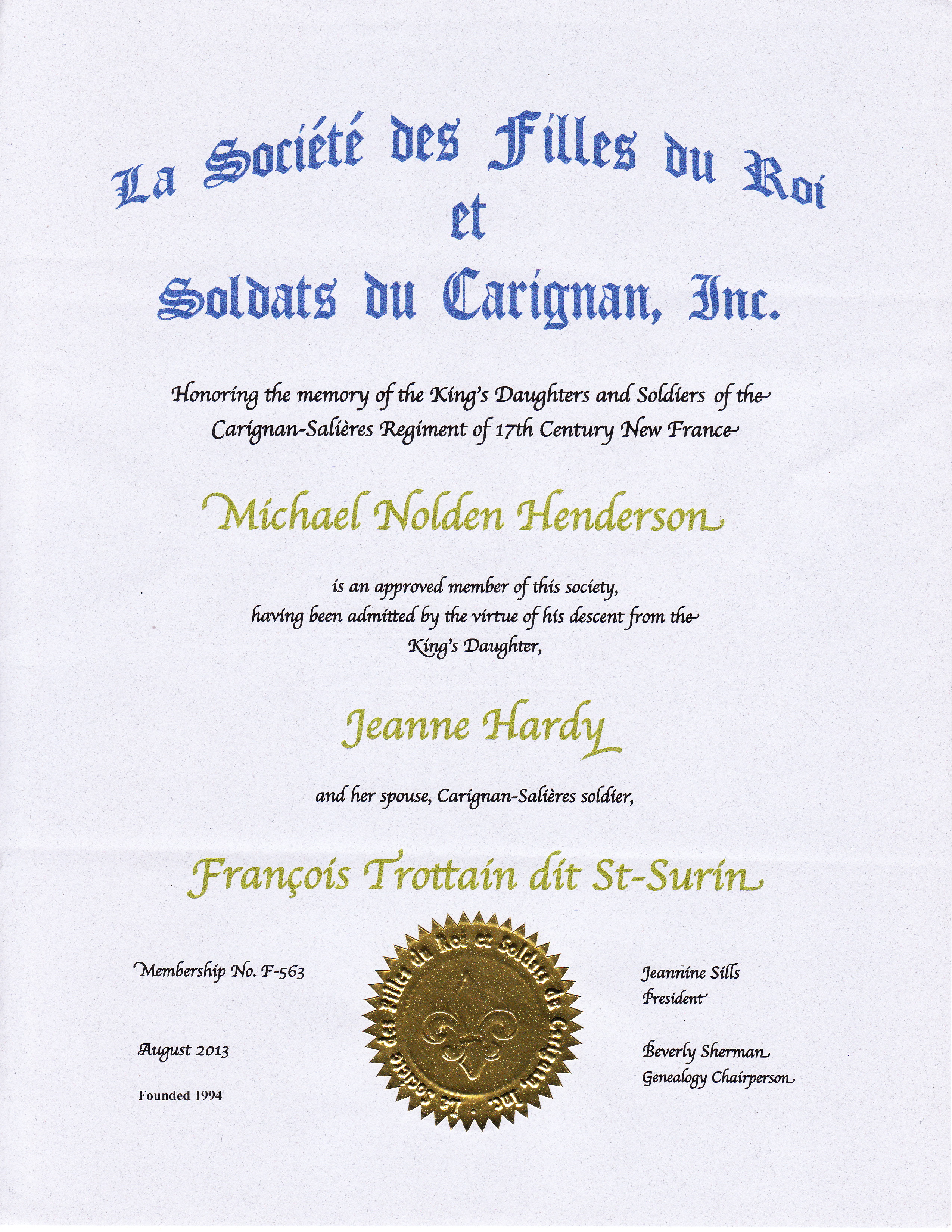 While tracing my Louisiana Creole roots beginning with my mother’s maternal line in New Orleans, I was successful in locating and documenting two of my earliest known French ancestors who arrived in Quebec, Canada in the years 1665 and 1668.  See previous blog post here of another documented discovery recorded and certified by the American-French Genealogical Society. 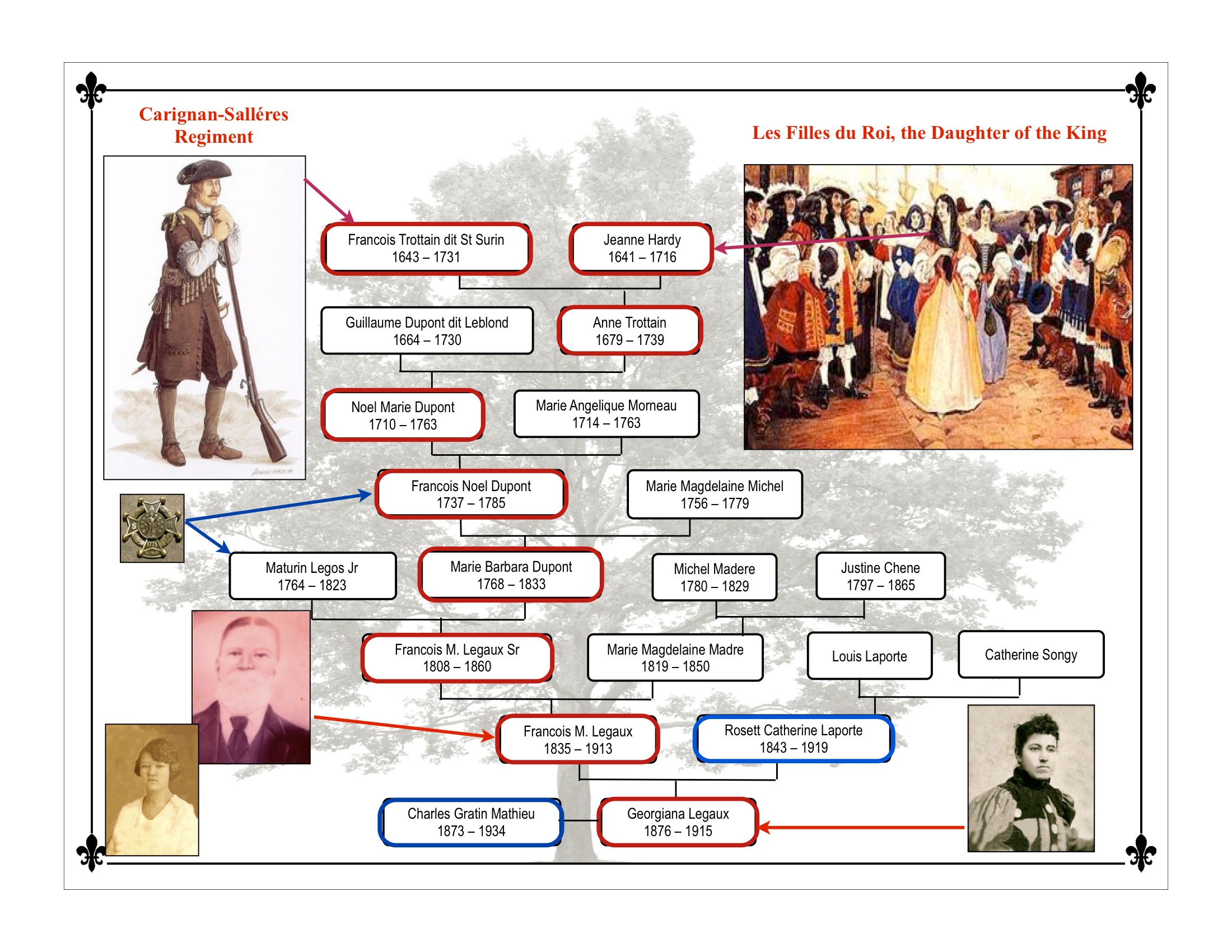 Francois Trottain dit St Surin and Jeanne Hardy are my 9th generation great grandparents.  After learning that Jeanne Hardy’s husband Francois Trottain dit St Surin was a member of the first expedition of Royal troops (Carignan-Salieres Regiment) to arrived in Canada in 1665 and he would become my earliest known french military connection, I  submitted an application for membership in La Société des Filles du Roi et Soldats du Carignan, Inc.  My genealogy and membership was approved  Aug 2013.  Here below is a little bit about my discovery.

The Carignan-Salieres regiment arrived in Quebec City in the summer of 1665, the first contingent  arriving on Jun 18.  This was the first  expedition of Royal troops to Canada. The Regiment counted twenty companies and each company was made up of three officers – a captian, a lieutenant and ensign – two sergeants, three corporals, five anspenssades and forty soldiers, including at least one drummer.  Four  other companies drawn from the regiments of Ligniéres, Chambellé, Poitou and Orléana coming from the West Indies also came to Quebec City with Marquis de Tracy, the new governor general.

Considering that the colony had about 3200 inhabitants, the arrival of some 1200 soldiers and 80 officers had an extraordinary impact on its development. A body of troops of this magnitude in Canada completely transformed what had until then been a precarious military situation for the  colony.  Finally,  towns could be built to clock the Richelieu River, the Iroquis’ traditional route.  In just a few weeks, the french went from the defensive stance that had been necessary for almost a quarter of a century to a new tactic: attacking the Iroquois on their own territory.

He was in the Naurois Company of the Carignam Regiment. They departed La Rochelle, France aboard  the Justice on May 24 1665 and arrival in Québec City on Sept 14 1665,  according Viateur Boulet / Bosher /.

Before the departure of the regiment in September 1668, he witnessed the marriage contract of his comrade Alexander Teschinay in Quebec August 13, 1668.  He married  on August 16, 1668 in Quebec City, Jeanne Hardy, Les Filles du Roi (daughter of the King) who departed Dieppe, France aboard the La Nouvelle France ( the new France) some time in 1668 and arrived in Quebec, New France on Jul 3, 1668.  She was the  daughter of Pierre Hardy and Mary Daviau or Daniau of the parish of Saint John the Perrot, diocese of La Rochelle Aunis (Charente-Maritime).  To learn more about these women on stuff you did not learn in class  Podcast.howstuffworks see here: Les Filles du Roi

François Trottain become Trottier according to the census of 1681, was a carpenter, seigneurial notary, bailiff and tax attorney Batiscan. He was said to also have been royal notary and keep notes Cap-de-la-Madeleine, Champlain, Batiscan and Sainte-Anne. Probably he never received his commission as royal notary, but the authorities allowed the seigneurial notary conscientious, appropriating this imposing title.

There is more,   Please see here.