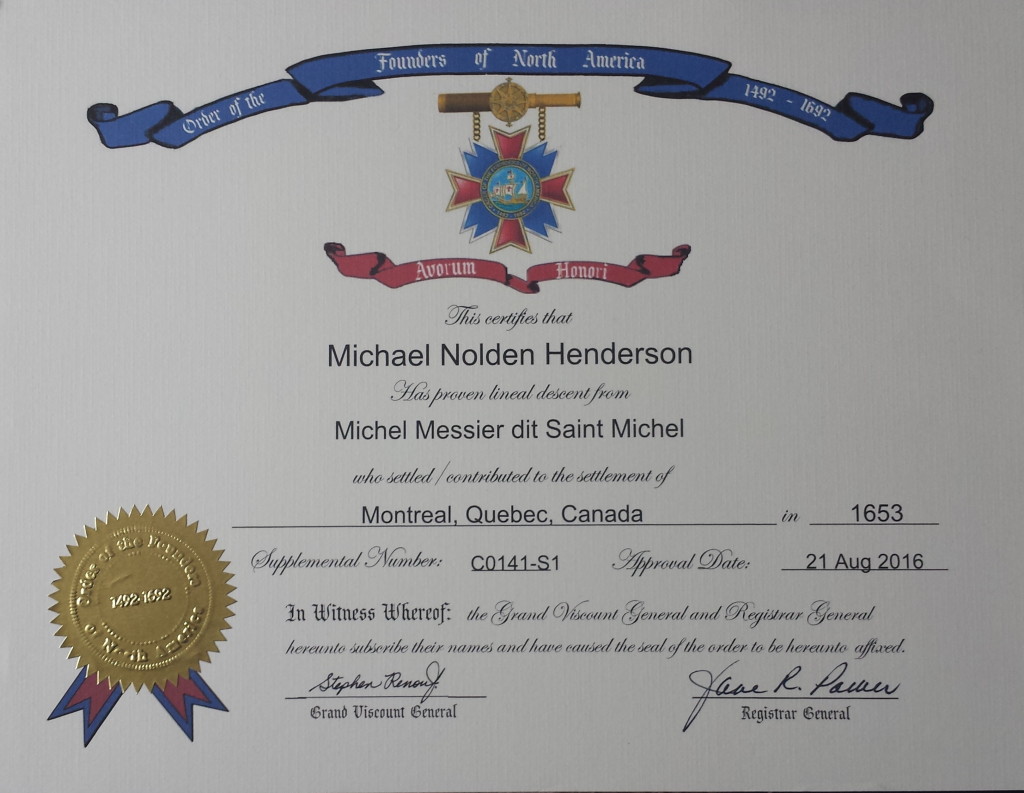 Once again, I have come to the end of yet another successful research journey with the completion of documented evidence and submission of an application to have one of my 17th century French ancestors named Michel Messier dit Saint Michel,  an early settler in Montreal, Quebec, Canada, recognized by the Order of the Founders of North America (OFNA) 1492 to 1692.

The OFNA is a lineage society whose purpose is to memorialize the individuals who founded North America through Colonization; including the Caribbean and offshore North Atlantic Islands during the period of 1492 to 1692. Members may descend from Spanish, English, French, Dutch, Scottish, Swedish, German, Danish, and Italian royalty, explorers, settlers, and seamen transporting and supplying these colonists.

Michel Messier dit Saint Michel, lieutenant of militia, seigneur, fur trader; was born about 1640 at Saint-Denis-le-Thiboult in the diocese of Rouen, France. He was the son of David Messier and Marguerite Bar; buried 3 Nov. 1725 at Saint-Anne de Varennes. See more about him here:

In a previous blog post titled Family’s Female French Progenitor Discovered, Documented and Claimed,  I submitted an earlier application after discovering and documenting my lineal descent from one of our family’s earliest known female French ancestors named Anne LeMoyne.

As always, it is my sincere hope that each of you on a similar journey continued to be inspired by the many success stories and achievements such as this one.

Check this family connection out. See here Justin and Michael.