It would be three years trying to locate documented proof of service for three German Coast of Louisiana ancestors of mine, who lived in the parish known today as St John the Baptist, about 30 miles outside the city of New Orleans, La. All three ancestors, according to their death records are said to have been buried in unmarked graves in the St John the Baptist Cemetery in St John the Baptist Parish. 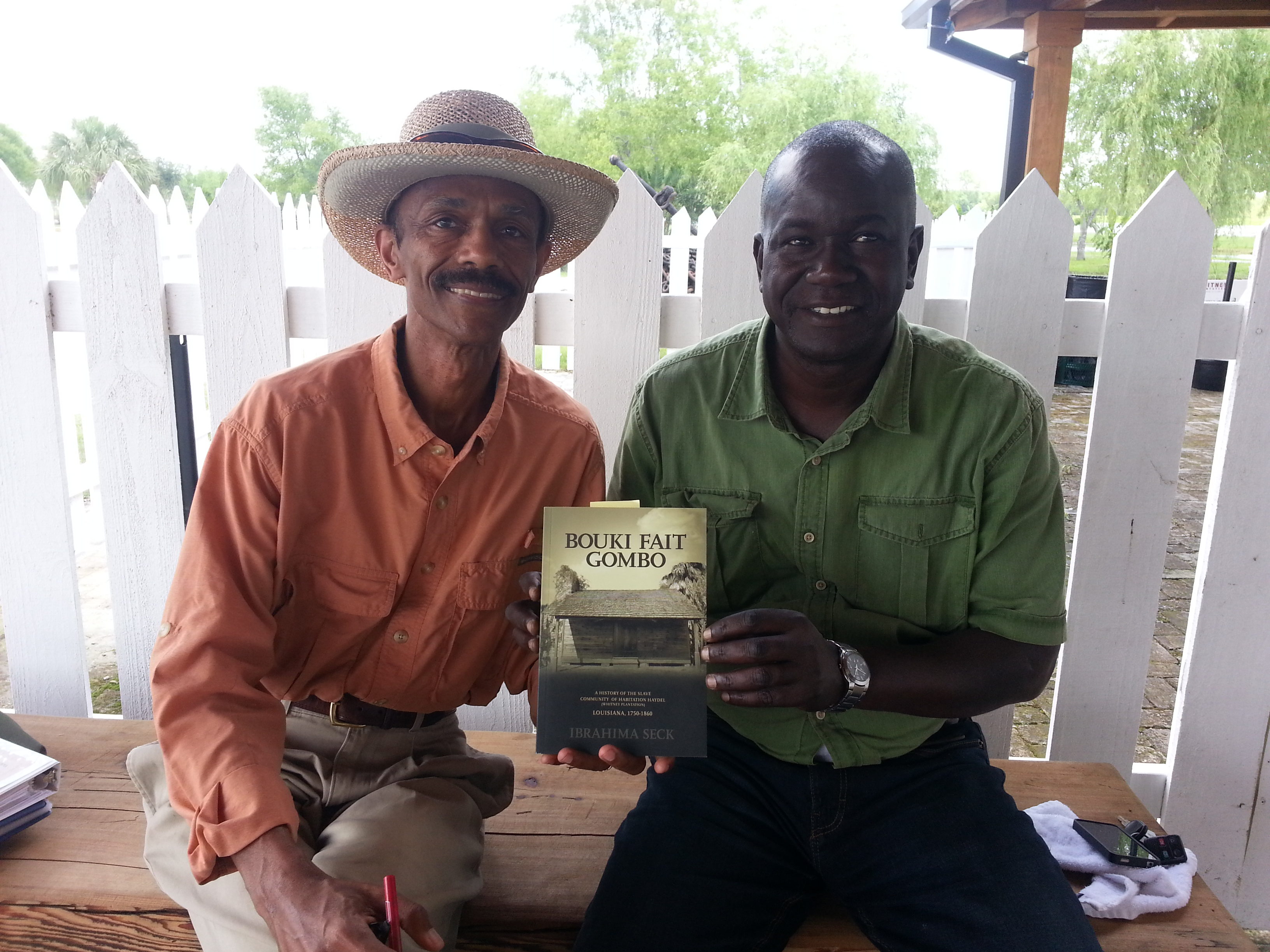 While visiting the Whitney plantation in 2016, I spoke with the director of research, Dr. Ibrahima Seck. I shared with him, some of my revolutionary war ancestral research concerning several ancestors who lived in St John the Baptist Parish.  I shared how excited it was about my discovery and the recent approval of them as Patriots of the American Revolution, because of finding documented proof of service for having served under the command of the Spanish Colonial Louisiana, Governor, and General Bernardo de Galvez.

Dr. Seck has written extensively about the Heidel,(Haydel) family and the Whitney Plantation in his book Bouki Fait Gombo. However, he was not aware of any involvement by any Haydel men during this time in Louisiana’s Colonial history.  I mentioned seeing several of the Haydel men also listed in that same document and what that could mean for them and their descendants.

Taking a closer look at a blog post, I wrote in 2015, we can now understand the significance of this document, the 1778 Militia list for St. John the Baptist parish, and also how it too, relates to several of the Heidel (Haydel) men titled: Three More Colonial Louisiana Ancestors Approved By the SAR. 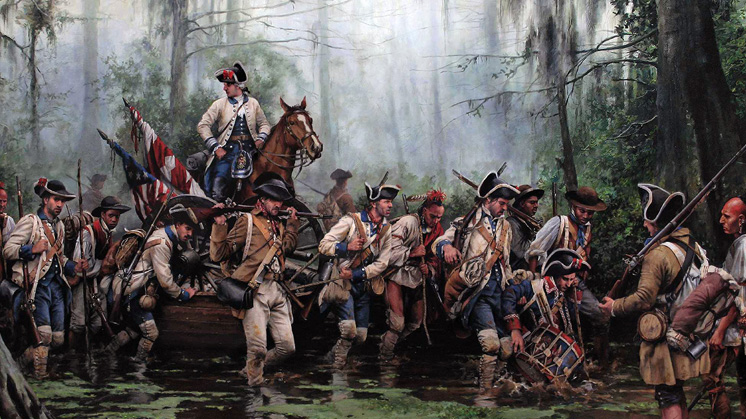 I also mentioned the significance of documenting these ancestors, many from the surrounding areas of St John the Baptist, St Charles, St James, and a few others parish militia groups who joined in when Bernardo de Galvez marched on through en route to his first battle at Baton Rouge.

If you aren’t familiar with this aspect of the historical narrative of the War of Independence, I invite you to view here below: Spanish Support and Participation in the American Revolution: I showed Dr. Seck, the names of several Haydel and Becnel men (marked in red) on the same militia list dated 1 Jun 1778, as my direct ancestors (marked in blue). I asked Dr. Seck if he knew of the final resting place of the two former builders/owners of the Habitation Haydel, now Whitney Plantation (Jean Jacques Haydel and the Evergreen Plantations (Christophe Haydel) who both lived in St John the Baptist Parish. (double click to enlarge militia list below) 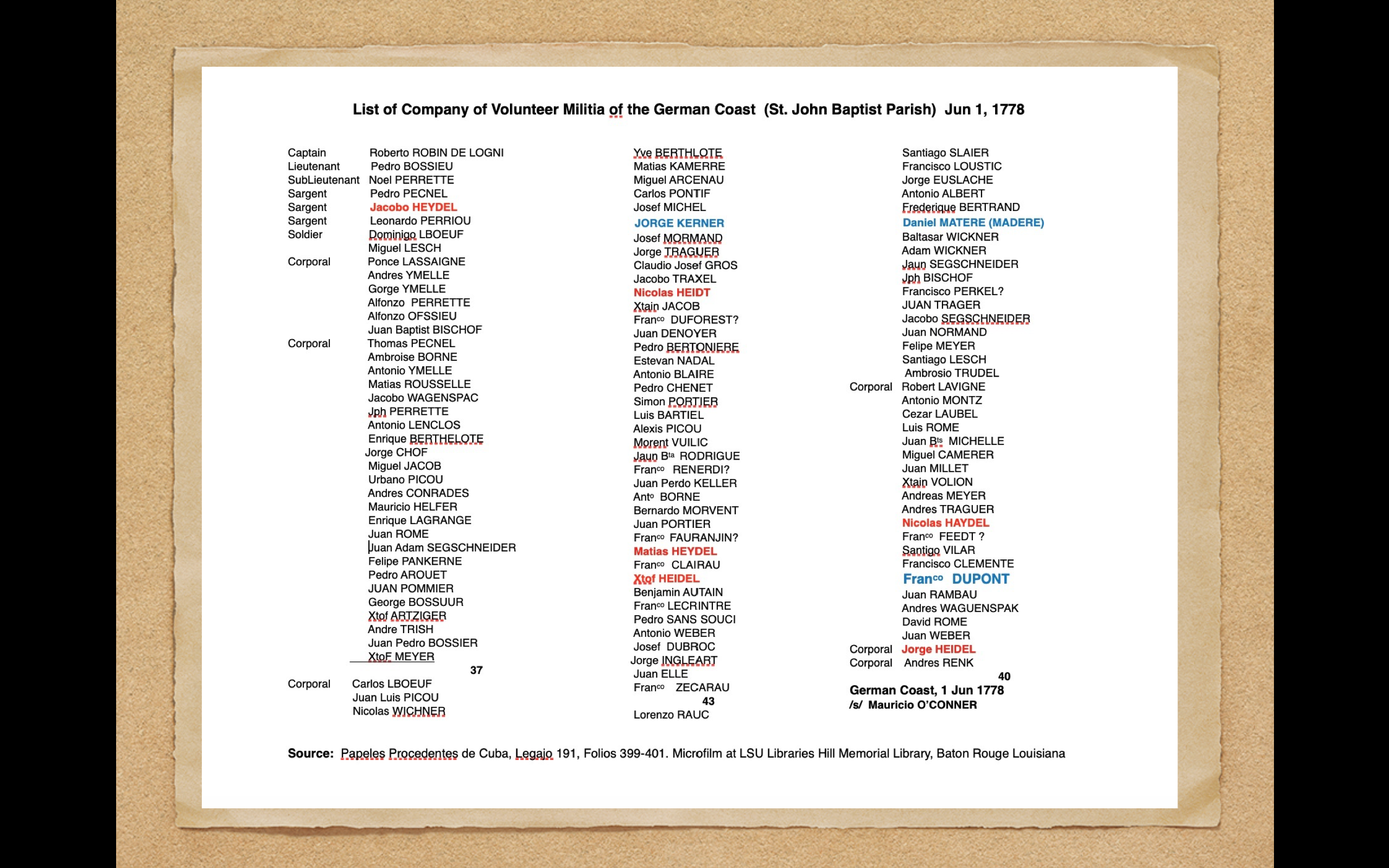 (Militia list with several Haydel Men named are in red)

These men listed above would remain members of the second company of Militia in St John the Baptist Parish in support of and during the entire time Louisiana, under the command of Spanish Colonial Governor and General Bernardo de Gálvez, who with 1,400 men, took to the field in the fall of 1779 and defeated the British in battles at Manchac 7 Sept 1779, Baton Rouge and Natchez (21 Sept 1779).  On March 14, 1780, after a month-long siege with land and sea forces, Gálvez, with over 2,000 men, captured the British stronghold of Fort Charlotte at Mobile 1781. The climax of the Gulf Coast campaign occurred the following year when Gálvez directed a joint land-sea attack on Pensacola, the British capital of West Florida. He commanded more than 7,000 men in the two-month siege of Fort George in Pensacola before its capture on 10 May 1781. 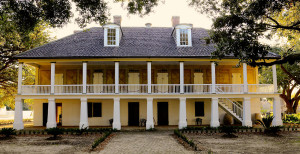 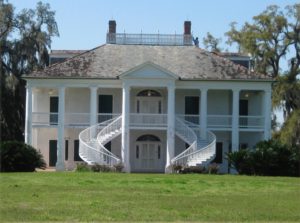 Dr. Seck said, Jean Jacque Haydel, the original builder/owner of the Habitation Haydel, now called Whitney Plantation was buried in St John the Baptist Cemetery and he also believed, Christophe Haydel, and Mathias Haydel were also buried there too.

Since my three ancestors were according to their death records, buried in St John the Baptist Cemetery, Dr. Seck, suggested, we drive over and to the cemetery to visit the gravesite of Jean Jacques Haydel.  The cemetery located adjacent to church at 2361 Highway 18 (River Road), Edgard, LA. 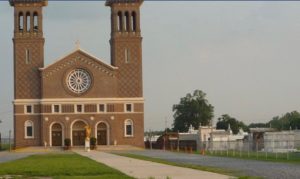 On our drive over to the cemetery, Dr. Seck mentioned, the original cemetery was reduced in size over the years, as the Mississippi river and levels system overtook part of the older parts of the cemetery, and there was a likelihood, that the gravesites of my three ancestors, may no longer exist and was probably washed away by the river.  Here are a few pictures were taken while visiting the St John the Baptist cemetery: 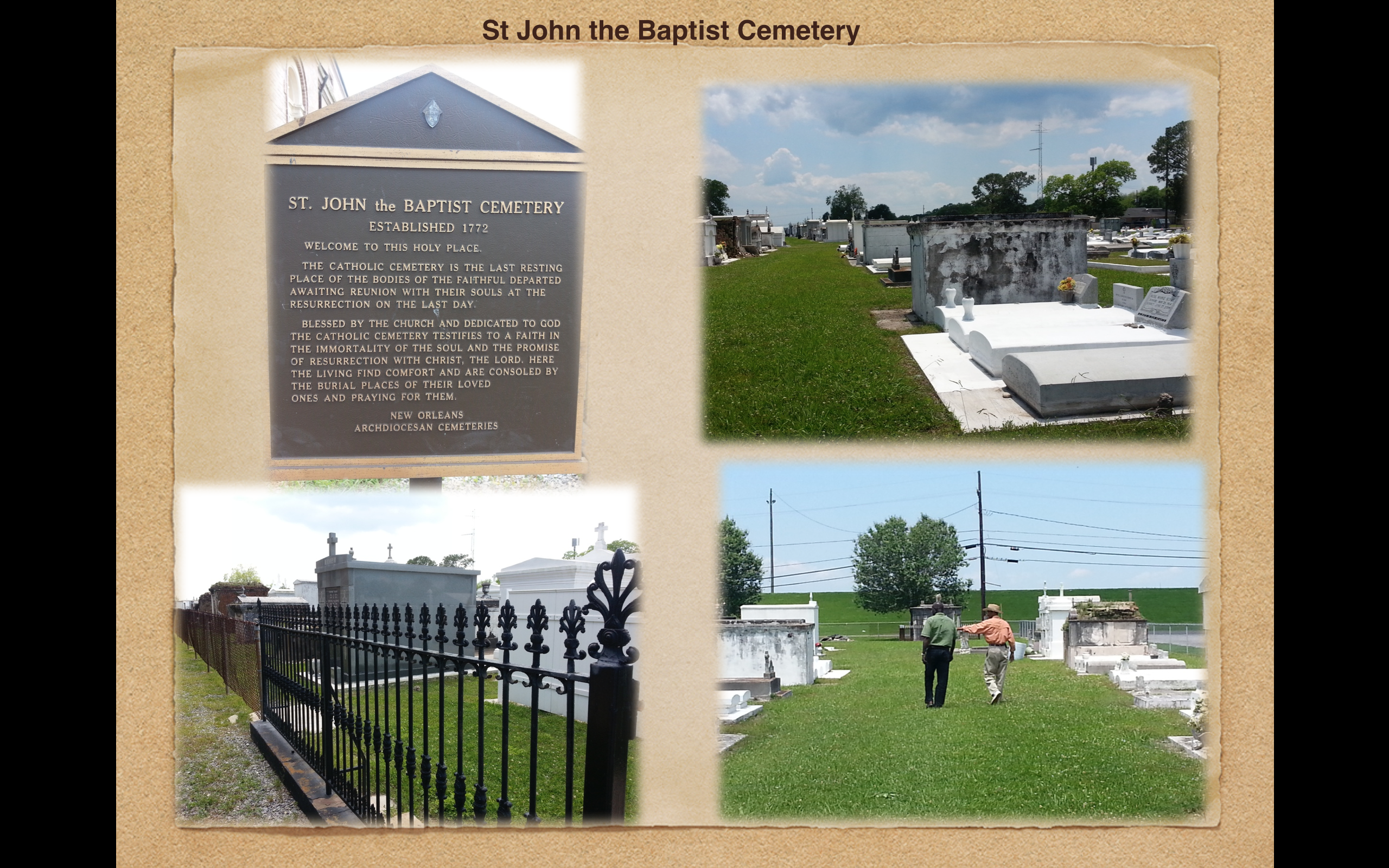 There it was, the tomb of the original owner/builder of the Haydel/ Whitney Plantation, Jean Jacques Haydel. Except for some minor repairs needed on some missing cement plaster, the site was in relatively good condition. The inscribed on the tombstone was his name, Jean Jacque Haydel ” Godfather of the Church” 1744-1826. 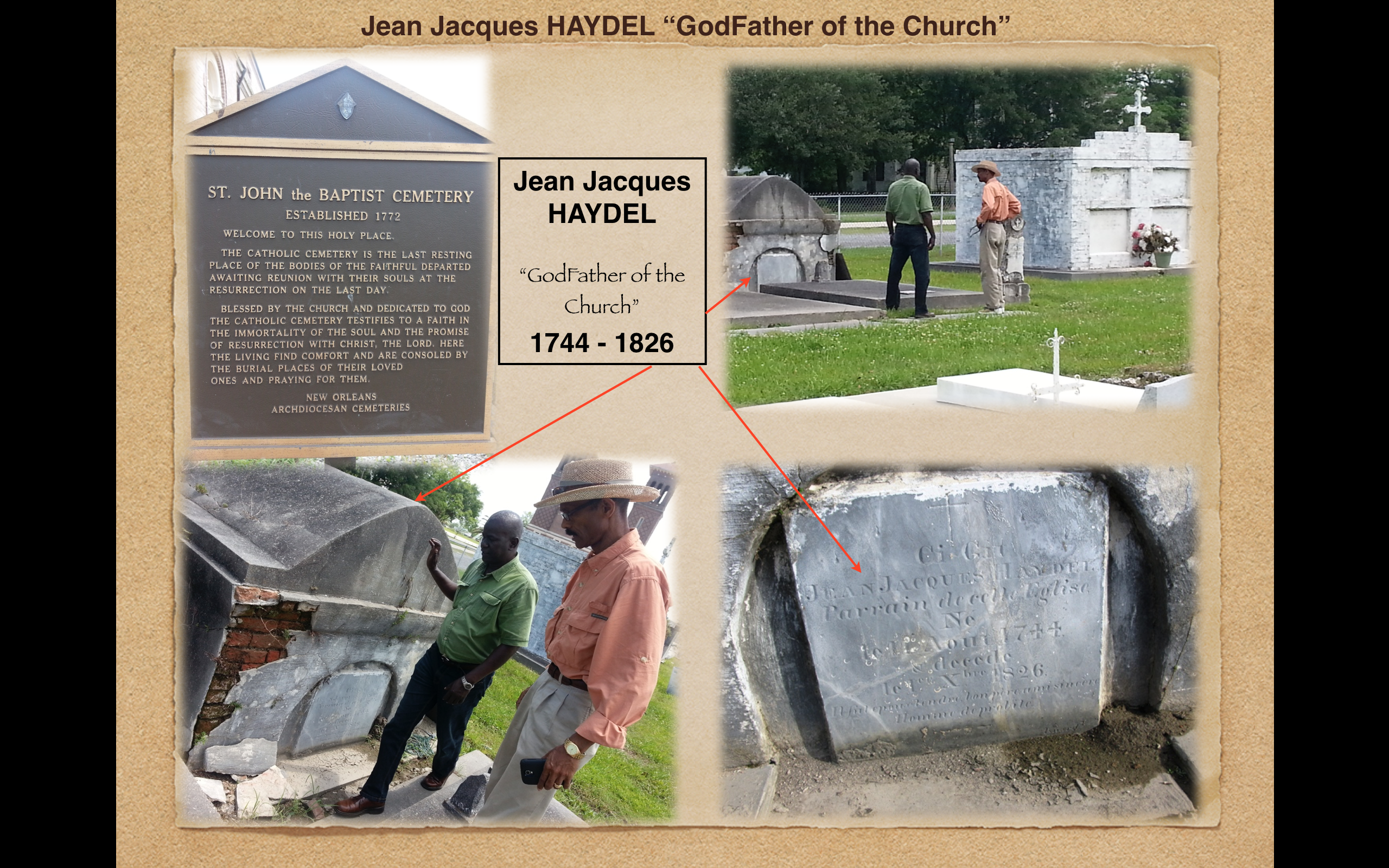 Here we have proof of service and a burial site of Jean Jacques Haydel. He is listed as Jacobo Haydel on the 1 Jun 1778, St John the Baptist parish militia list as Sargent Jacobo Haydel. see below 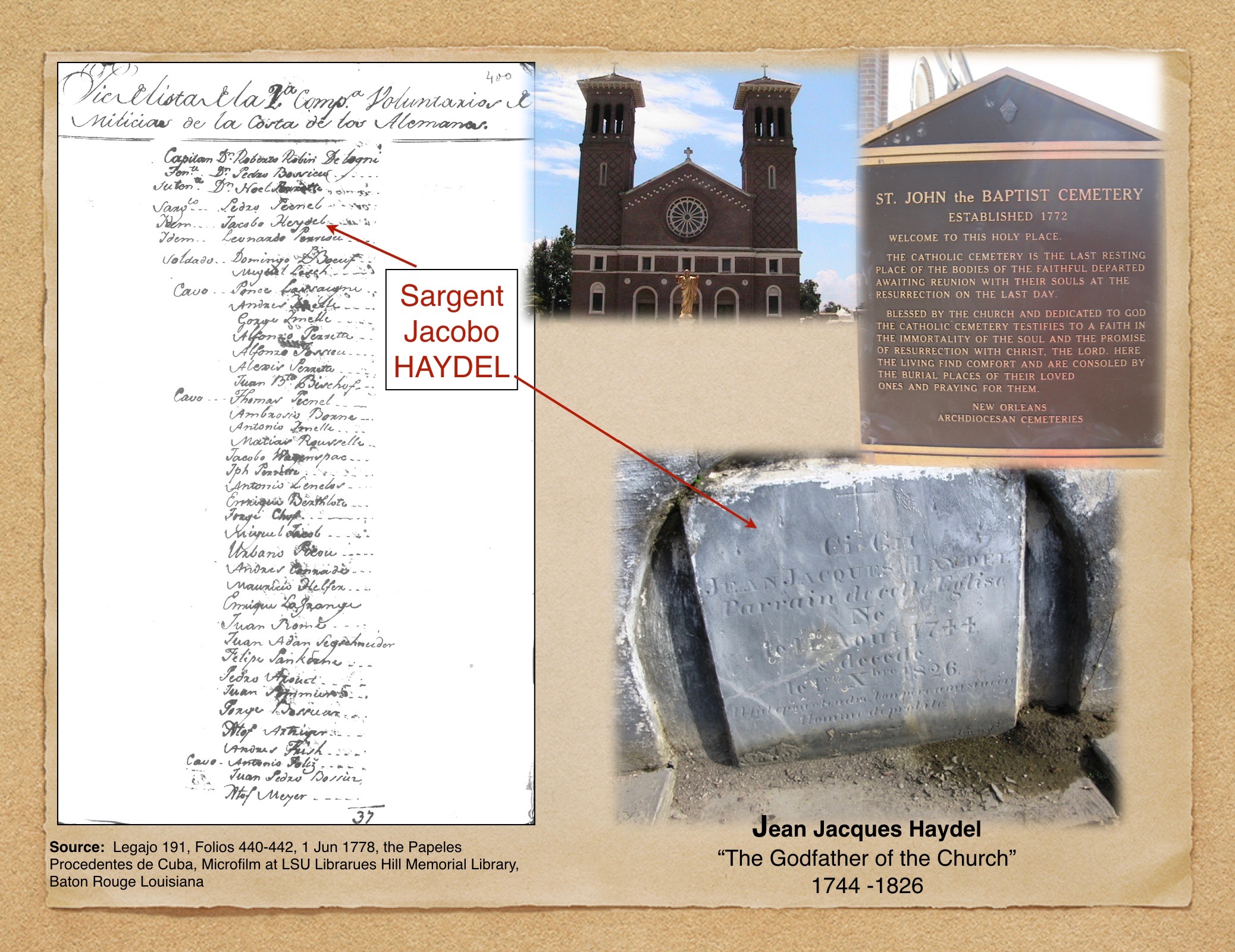 I was a little concerned about the reference to a Sargent Jacobo Haydel and wondered if this was the same Jean Jacques Haydel.  I looked through the names of all the sons of the progenitor of the Haydel family, Ambroise Haydel, and none were referred to in any other documents, I came across as Jacobo Haydel.
So I research to see, if Jacques was a variant of Jacob and found according to Wikipedia, Jacques as given name James is derived from Iacomus, a variant of Iacobus. As a first name, Jacques is often phonetically converted to English as Jacob, Jake (from Jacob), or Jack. Jack, from Jankin, is usually a diminutive of John but can also be used as a short form for many names derived from Jacob like Jacques.
I also knew that Jean Jacques Haydel’s, mother Anna Marguerite Schoff’s father was named Jacob Schoff  (also spelled Schaaf) and it is plausible, that the recorder who wrote down the names of the men mustered on  1 Jun 1778, took the liberty of spelling, Jean Jacques Haydel as Jacobo Haydel.
We can see clearly in other instances where the recorder of the militia muster list also phonetically spelled other Haydel men names differently too ( Mathias Haydel is seen spelled Matias Heydel, Christophe Haydel is seen spelled Xtof Heidel, Nicolas Haydel is seen spelled Nicolas Haydel, and George Haydel is Jorge Heidel).  None of the other Haydel men listed on the muster were found in marked tombs during my visit this day, however, according to each of their, St John the Baptist church baptism records, they are all said to be buried in the St John the Baptist Parish Cemetery. 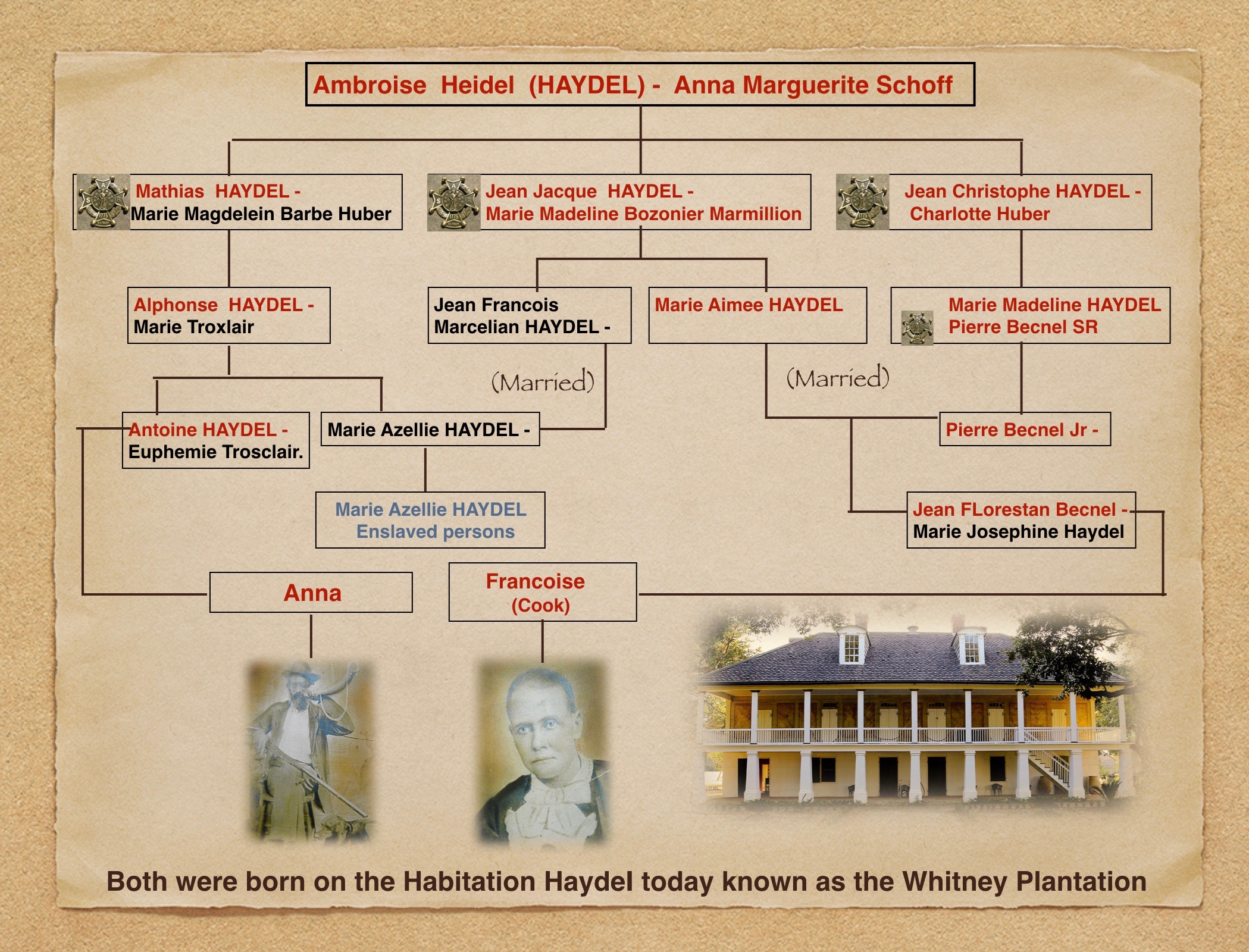 All of these Haydel men are ancestors to both Victor Theophile Haydel and Marie Celeste Becnel and their descendants. Now descendants have proof of service of their ancestor’s participation under the command of the Spanish Colonial Louisiana Governor and General Bernardo de Galvez.

Any descendant who can link their family’s ancestry to one of the children of Victor Haydel and Marie Celeste Becnel Haydel can now link themselves to individual Haydel ancestors who were on the militia service of 1 Jun 1778, under the command of the Spanish Colonial Governor-General Bernardo de Galvez and his support during the American Revolution.

Now I invite you to view this video and remember, “it was a white Haydel man who fathered the mixed-race son named Victor Haydel” and now provides him, (Victor Haydel) and his descendants with an even great legacy and ancestral connection to Louisiana’s participation and support in the War of Independence.

With the proof of service (STJB, 1 Jun 1778 militia list), an ancestral chart from any designated Haydel militiamen,  descendants who can provide documentation that will show a direct lineal descent from one of the children of Victor Theophile Haydel and Marie Celeste Bencel, should now consider seeking membership in the National Society Sons of the American Revolution (SAR) and Daughters of the American Revolution (DAR).

“Until the Lion has his or her own storyteller, the Hunter will always have the best part of the story“~ African Proverb